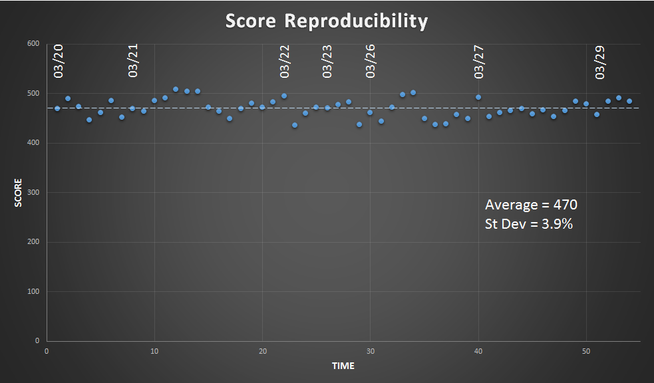 High fruit and vegetable (F/V) intake has been associated with lowered risk of various cancers, cardiovascular disease, age-related degenerative eye diseases, and obesity.  Many countries, including the U.S., are supporting interventions to increase F/V intake among their citizens.  National policy, such as Healthy People 2020  and the  Dietary Guidelines for Americans  call for increases in F/V intake in children and adults.

An important feature of any biomarker is the variability between subjects.  Ideal biomarkers would vary widely across different individuals within a population, but be relatively constant over time within an individual. VEGGIE METER®  fulfills both requirements very well, as demonstrated in the two figures shown below.

There is considerable interest in using the VEGGIE METER®  to evaluate whether or not interventions designed to improve fruit and vegetable intake actually change intake behaviors and improve nutritional status.  This is a critical research need, because without objective veriﬁcation that behavior change has occurred, results of trials (of health outcomes, as well as of intake) are difﬁcult to interpret.  The ideal method for assessing response to intervention is in the setting of controlled intervention studies.   In partnership with the U.S. Department of Agriculture, our group assessed skin carotenoid status in response to several different dietary interventions, including a carotenoid depletion phase (provision of minimal carotenoid-rich foods for six weeks), followed by a high fruit and vegetable-provided diet (eight weeks), followed by another depletion diet (six weeks), and then subjects returned to their self-selected diets for an additional eight weeks. Skin carotenoid levels decreased during depletion and increased during high-carotenoid feeding, with skin carotenoid status tracking similarly to plasma carotenoids although the rates of decrease (during depletion) were faster in plasma versus skin.  Skin carotenoids had not yet plateaued by 8 weeks post-intervention, suggesting that they reﬂect intake over at least the prior 2+ months.  Thus, multiple lines of evidence now show that skin carotenoid status is responsive to carotenoid intervention involving supplements, and carotenoid-rich fruits and vegetables consumed in typical US diets.

Carotenoids have a characteristic absorption band in the blue wavelength region of the visible light spectrum.  The absorption strength scales directly with the concentration of carotenoids present in the skin.  Using our patented and validated reflection spectroscopy approach, skin carotenoid levels can be objectively measured in a non-invasive rapid fashion.  Importantly, the VEGGIE METER® corrects for pigmentation from melanin and blood and therefore is accurate across all ethnicities.

Since higher VEGGIE METER® scores reﬂect greater F/V intake, lack of smoking, and lack of adiposity, it is attractive for use as an integrated biomarker of overall health in longitudinal studies testing future chronic disease risks.  In intervention settings, skin carotenoid status responds predictably and consistently to carotenoid interventions, and as objective biomarker of change should be very attractive for inclusion in F/V-based intervention trials.

For a given subject, the score is highly repeatable, varying only slightly between measurements. The magnitude of the Standard Deviation, here 3.9%, can be decreased or increased somewhat  depending on skin smoothness. 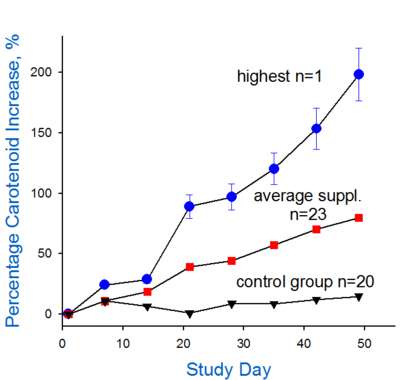 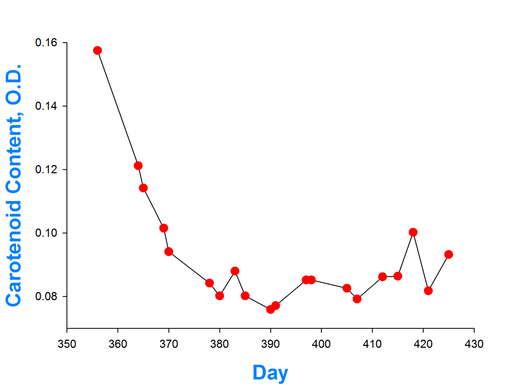 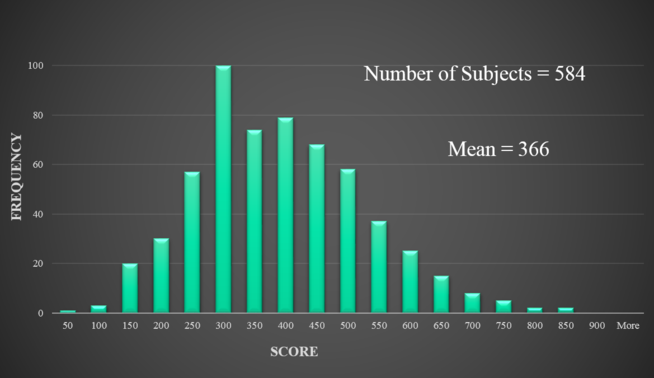 The veggie meter provides an attractive objective indicator for F/V intake.  It can identify populations at particular risk for inadequate intake of F/V, evaluate the success of interventions aimed at increasing F/V intake, and serve as a biomarker associated with better health. 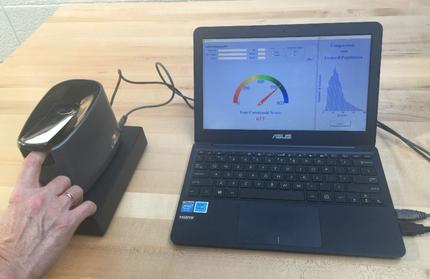 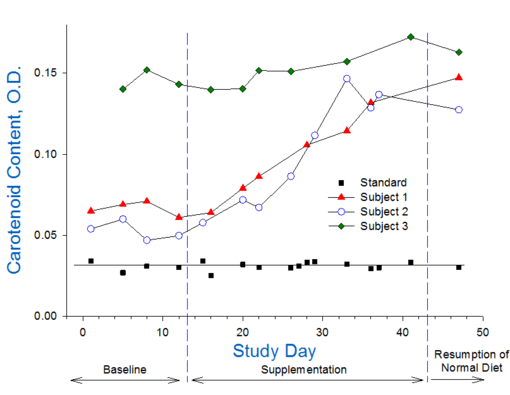